With renewed enforcement of the 351 rule, crafty engine builders worked hard; they all wanted to race and be successful in the premier class. In Sweden, aftermarket race shops and Husqvarna worked on parallel paths experimenting with 351+ two-stroke engines. Several big-bore projects were also underway in Europe and their goal, similar to that in Sweden, was to meet the 351 minimum displacement with good reliability. Extra power was considered secondary since most engine developers felt that the current 250 two-stroke engines were already as quick as needed. Still, many traditionalists believed that only the large four-strokes were the proper racing machines for the class. Their power, their sound—how could some buzzing ring-ding ever replace the true motocross machine? The philosophical split between four-stroke and two-stroke supporters was obvious. At some races, a petition was circulated among the riders to keep the two-strokes out. “People stopped coming to the races,” said Bill Nilsson.

With the competitive landscape changing by the week, there was the unsettling recognition that two-strokes might soon dominate that once exclusive four-stroke domain. At that point, the long-term future of a traditional fourstroke in 500 motocross, at least for Husqvarna, was questionable. Hallman recalls, “The 500 class effort was discontinued. They did not see any future there (for four-strokes), but the production of 250 machines increased.” 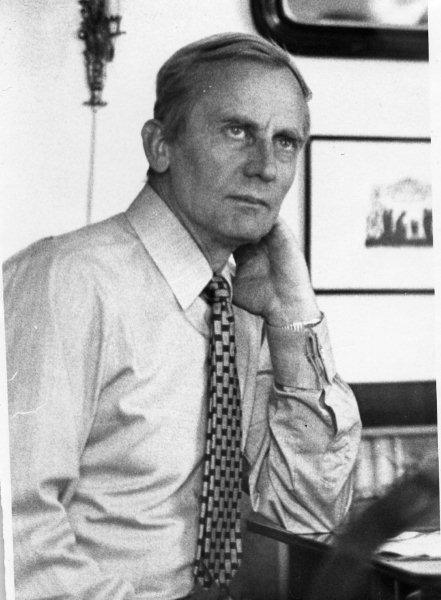 The events of 1962 caused Helmin and Jauren to reflect on how to meet this new challenge of building a Husqvarna big-bore two-stroke. They realized that two components were of major concern: pistons and transmissions. The piston question was more easily resolved, since Husqvarna had great cooperation with both Kolbenschmidt and Mahle, German suppliers of pistons and cylinders for motorcycles and chainsaws. Given just sketches, both companies could easily design two-stroke pistons of previously unheard of diameters. The real problem was the transmission. The current 250 two-stroke transmission was already stretched thin from its origins in the 175cc three-speed Drombagen.

Helmin judged the current transmission would not be strong enough for a 350+cc engine. His solution was to build a non-unit engine with crankcase, transmission and primary drive as separate units, much like the four-strokes they were trying to replace. Rough sketches were prepared and Morgan Hjalmarsson improvised from there. The cylinder and head, crankcase, and crankshaft were cast or fabricated. A small chainsaw magneto was installed for the spark. A 72 x 87 mm bore and stroke yielded 354cc, often referred to as a 358cc. Following pre-1963 design practice, the cylinder had two exhaust pipes.

Torsten Hallman rode and evaluated the open class prototype, but his priority was to defend his 1962 250 title; he only raced the non-unit 358 on local or international events. He never really developed a liking for it. According to Hallman, it was plagued with an unacceptable level of vibration. “The vibration made for a tiring ride and also contributed to part breakage,” said Hallman. “The flywheel mass was too small, causing the vibration… you thought you were lucky to finish because everything was vibrating apart.”

The power delivery was also abrupt, making the motorcycle more difficult to control. Another problem, at least for riders accustomed to the much narrower Silverpilen two-stroke engine, was the greater width at th footpegs. This limited lean-angle into turns before the inside footpeg would begin digging into the dirt.

For the 1963 Motocross des Nations in Sweden, Hallman was selected to the Swedish 500cc team, but he had little confidence in the reliability of the 358cc two-stroke machine. He wanted to fit a Lindstrom 360 engine into his a 250 Husqvarna frame. As a 250 rider, he really wanted to win the race and with a Lindstrom 360 engine, even limited by its three-speed transmission. Hallman felt certain he could beat the entire front running 500 four-strokes. His request was OK’d by Jauren, but someone higher up refused to give the OK. Hallman reasoned, “Since the Lindstrom 360 only said ‘Husqvarna’ on the outside of the engine, the switch would have been unnoticed by most onlookers.”

His concerns about the 358 were confirmed as he finished 5th the first moto but was left stranded with a dead engine in the second moto while he was leading. Needless to say, Hallman was not happy.

Hallman and Tibblin were the only contracted riders for Husqvarna in 1963; they both repeated as World Champions in their respective classes. Hallman rode an improved production 250 two-stroke while Tibblin was still astride Husqvarna’s four-stroke 500. His main competition was Sten Lundin, whose bike was now in Lito colors. Hallman was in top form, plus both of his former BSA rivals had moved to the 500 class and Dave Bickers on his Greeves seemed to suffer unending mechanical ills. At season’s end, Bickers bought a Husqvarna and raced it as a privateer. CZ figured prominently for the first time in the 250 class with Czech Vlastimil Valek finishing a distant second.

Despite Tibblin’s domination of the 500 class on his four-stroke, Husqvarna saw the writing on the wall and they had already made their decision. They decided to drop the four-stroke in the 500 class and, factoring in Hallman’sfeedback, to work on improving the big two-stroke. They made several modifications for the 1964 season. The engine was enlarged to 400cc by increasing piston diameter from 72 to 76mm and keeping the 87mm stroke. The exhaust pipe on the right hand side was eliminated per the new design practice. The chainsaw ignition and transmission were carried over.

Tibblin, the reigning world 500 champion, politely refused to ride the big bore 400 as he believed it was far from ready. He saw more life remaining in the four-stroke, especially considering the improvements that Hedlund was planning. So he left Husqvarna under good terms to continue working directly with Hedlund and ride his new white bikes with the DOHC engine.

Hallman had no plans to move up to the 500 class, especially under these circumstances. To take Tibblin’s place, Bror Jauren contracted Ove Lundell, formerly at Monark, and Per Olof Persson, already on the 500 four-stroke Husqvarna, to ride the new two-strokes. Based on previous year’s results, they were seeded to ride the 500 Grands Prix. Their agreement with Husqvarna offered some flexibility in that they would be allowed to switch back to their fourstrokes if and when the conditions became more favorable.

In the 250 Class, Dave Bickers was back and ready to compete. He’d used his Husqvarna to put pressure on the Greeves factory, but reliability was still an issue. Unlike Husqvarna and CZ with their own engines, Greeves had to rely on Villiers for engines; being a small customer, their cries for needed improvements went mostly unanswered. This became the breakthrough year for CZ. It was newcomer sensation, twenty-year-old Belgian Joel Robert, who beat Hallman.

Russians Viktor Arbekow and Igor Gregoriev were On the 500 GP circuit, Lundell and Persson brought their two-stroke and four-stroke bikes. After four races, Lundell had managed one 5th place finish and Persson a sixth; but by round five both had parked the two-strokes. They quickly demonstrated they were more competitive on their old four-strokes by consistently finishing among the top five or better.

The high point for the non-unit engine was Lundell’s win at a Swedish Championship round at Kristinehamn, the only victory of any significance this bike ever achieved.

Picture: Owe Lundell winning the Swedish Championship round in Kristinehamn!

Tibblin continued on his winning ways on the Hedlund, but Jeff Smith, on the 420 BSA, had become a strong challenger using an engine based on the much lighter 250 and not a Gold Star. The Brit eventually narrowly edged Tibblin for the title.

At the end of the year and after two years of development, Husqvarna had a 400cc twostroke that generally was not competitive and proved unpopular with its riders. Vibration was still unacceptable, reliability was poor, primary drive-chains were weak, and the transmission was still too wide.

Husqvarna decided to retire the unpopular non-unit 400s. Of the three bikes built, only one remains today—it’s a re-creation using one of the original engines and transmissions. Lindstrom’s 351 three-speed race bikes were the most successful of the independents. Not having much of an option, he chose to build on the 250 engine. This was no small task, requiring a 10mm spacer between the crankcase halves to make room for a wider and heavier crankshaft. He also machined his own longer transmission shafts with wider gears to match the new internal dimensions. His engine required high maintenance but proved competitive, achieving notable success in the Swedish Championship. Christer Hammargren became the Junior Motocross Champion. Hasse Hansson placed prominently in a couple of rounds against the four-stroke regulars. Lindstrom offered a limited number of 351 units for sale in the late summer of 1964.

Hallman felt an open class bike should have the same light feel and width as the 250. Not sure what Husqvarna’s next move would be, he sketched his idea of a good 360, using the existing 250 crankcase design. Sensing a lack of urgency from Husqvarna, Hallman forced the issue in March of 1965. He had the factory shop weld together a special crankcase on a 250 engine where the original crankcases had been sawed off. The gear drive from the crankshaft to theclutch was not very precisely aligned, but it worked.

Hallman rode the bike successfully the following week in St. Anthonis Holland, the first big International race of the year. The engine was noisy, but it worked fine—until it eventually broke. But by then, Hallman had proven his point: the transmission and clutch were good enough for the larger engine However, such a re-design would require expensive changes to the current 250 crankcases. With few options, the design team came up with an elegant solution. The crankshaft centerline was moved forward and the casting adjusted to accept a larger crankshaft diameter. Both side-covers and one front motor-mount bolt remained in the same location. This produced a 350.1cc engine with a bore and stroke of 78.7 x 72mm. As a result, the primary drive ratio changed to spin the gears faster, reducing the load on the transmission. The power gain when compared to a 250 was modest, as the primary goal was to meet the FIM requirement, plus they still had to work around a transmission with Silverpilen origins.

This project was late in coming, so Husqvarna found itself one year behind the competition, especially CZ. The first prototype was not ready until February of the next year. And it wasn’t until mid-year 1966 that the factory finally produced 50 units of the 360. From that point on, the 250 and the 360 would share the same crankcase. The 250 crankshaft was now the same outside diameter as the 360, but with a shorter stroke.

According to development engineer Tommy Malm, “We lost 3 hp on the dyno with the 250 using the big crank case, something we struggled to get back.”