Husqvarna wanted to shift their focus away from making complete bicycles and mopeds in a shrinking market, and concentrating on their core competency; developing and making engines. In 1962 Husqvarna entered into agreements to supply moped engines and engine technology to their competitors, Monark and Nymanbolagen, Crescent. Those agreements triggered investment in a new engine production facility named M1, with initial projections for a capacity of up to 70,000 engines per year. Sample engines were delivered late in 1962, but discussions regarding quality and price broke down, leading Monark to buy from Sachs while Nymanbolagen cancelled its order. At the time, the moped market was starting to collapse so the M1 plant was never used for moped engine production. Instead it was gradually taken over by sewing machines and chainsaws, but it also left an opening for motorcycle engines.

The failure of the moped engine project was seen as an opportunity by the motorcycle racing enthusiasts at Husqvarna. Racing successes on modified Silverpilens, by privately owned and factory-built machines, had created a demand for a two-stroke motocross racer. The aftermarket was taking care of some of this demand, but left other potential customers unsatisfied because they preferred to buy a new, factory-built machine. The preference for a Husky was understandable since Husqvarna was the leading brand.

Seeing an opportunity to capitalize on the existing demand, Bror Jauren in sales and Ruben Helmin in engineering proposed a project: building 100 machines to be sold to prominent racers. They submitted their plan in late 1961 to a mostly doubtful Board of Directors. Their proposal stressed the use of Silverpilen components that were sitting unused because of the sales slump. Also in their favor; competition models were sold without warranty. Jauren and Helmin wanted a quick answer, but they would just have to wait.

By end of 1961, declining Silverpilen sales forced Husqvarna to be frugal when planning for the new season. Torsten Hallman, seeing a financial squeeze coming, talked to Greeves and even rode one in the grueling Swedish Novemberkasan Enduro. Ruben Helmin came to the rescue, coaxing some money out of a meager budget for Hallman. Hallman still recalls the telephone call from Helmin in late-1961. “Helmin told me, ‘We have been given the OK to build a four-speed engine for next season and we want you to be our rider,’” remembers Hallman. He didn’t have to think about it long. With full confidence in Helmin and Husqvarna, Hallman agreed immediately.

For 1962, the FIM elevated the 250s to world championship status; Husqvarna was ready. Torsten Hallman had his new four-speed bike with more power and new Norton forks. It took a few races to get the new fourspeed to work correctly. The gearbox layout was quite unorthodox, limiting the choice of ratios for each gear because of the close shaft spacing, which was dictated by the Silverpilen castings. Additionally, the shift mechanism was rudimentary and imprecise, but once they got it sorted out, Hallman’s bike proved highly competitive.

Hallman’s main competition was the new BSA 250cc four-stroke team of Jeff Smith and Arthur Lampkin. In the beginning of the season, Hallman had a lot of respect for the hard charging Brits. But when he realized he had the speed, he confidently closed out the season’s last six races with five wins and a second. That effort gave him his first world championship. Later that season, Olle Petersson and Finn Aarno Erola were added to the 250 team as support riders. They were loaned bikes and supplied spare parts for the year.

The effort for 1962 included Rolf Tibblin, who was asked to continue from the previous year in the 500 class, where he was virtually unbeatable on the Husqvarna four-stroke. So were his Swedish teammates. The next four positions in the point standings also went to the Swedes. At the 1962 Motocross des Nations (for 500s) in Switzerland, the Swedish team of Rolf Tibblin, Bill Nilsson and Gunnar Johansson, Lito and Ove Lundell, Monark were so dominant, they crossed the finish line side by side.

Motocross success had positive spillover to Husqvarna’s other products. “Proof of the previous support from the chainsaw people for our effort in 1962 was the fact that the postcard printed for me to hand out had a picture of a chainsaw on the backside—not a motorcycle!” said Hallman.

Reluctantly Back in the Motorcycle Business

Despite verbal OKs, it still took until July 1962, before the Board provided the formal go-ahead to build the 100-series Hallman replicas. No doubt, the board’s decision was swayed by the fact that Husqvarna President Stig Birgenstam, a racing enthusiast, supported their efforts. The project would partially utilize the new M1 engine facility. Even though Jauren and Helmin received an affirmative answer, they did not receive a special budget and investment was to be kept at an absolute minimum. However, the
legitimacy of the project made it easier to enlist help and borrow monies from other engineering projects. To save time and money, as many Silverpilen components as possible were utilized. The engine needed modified crankcase castings, a new crankshaft to reach 250cc and a production version of the four-speed transmission that took Hallman to victory in the 1962 World Championship series. It also required new tooling and fixtures for machining the crankcases, cylinder, cylinder head, and other major components.

The project was popular within the company, but it took creative accounting and employees willing to work on their own time to keep it moving along. After some discussion, it was decided to deliver the first customer model in early 1963. Reaching this target would become a major accomplishment by the entire Husqvarna team, requiring cooperation with “new” departments such as Product Planning and Purchasing. Despite its popularity, the project required an extra push each day to keep it moving on schedule.

Hallman recalls, “There was a lot of hesitation among the leading positions within the Husqvarna factory. Not everyone supported the idea of investing in the production of motorcycles again. Racing victories convinced the management to set aside enough money so that the production of motorcycles could continue. It took a strong effort by the group not to give up. I am happy I was there during the ‘heavy years’ when the motorcycle enthusiasts within the Husqvarna factory were facing a headwind. Without this teamwork, where would motocross be today?”

A Look into the Future?

Largely overlooked was the performance of Vlastimil Valek at the Czech 500 Grand Prix, who won the first moto riding a 250 CZ, overbored to 262. It was the first ever win for a two-stroke in the 500 GP class and was a shot across the bow of the four-strokes. Valek’s success opened the eyes of riders and manufacturers alike.

Yielding to four-stroke loyalists, at the end of 1962 the FIM mandated that any motorcycle entered in the 500 class must have an engine displacement of at least 350.1cc (commonly called 351cc). It was already an existing rule that had been ignored until cries came from four-stroke loyalists. This new minimum displacement targeted the over-bored 250 twostrokes, seemingly moving the 500 class out of their reach, and appeasing most of the fourstroke contingent.

While Hallman was winning his first 250cc World Championship, the works replica project at home moved forward at full speed. But the first pictures and sketches of the bike created some immediate concern among potential customers. The cylinder was new and different, with only one exhaust pipe where Hallman’s works bike had twin pipes. Also missing were the mysterious covers on each side of the cylinder. These variations from Hallman’s ride concerned potential buyers, who felt they were not getting a true replica of the winning bike. They were relieved to see Hallman start the ’63 season on a motorcycle identical to the production model. The 100 replicas, easily the best 250cc motocross machines available at the time, were all sold before they were built.

The ordering process required a call or letter to Bror Jauren. After approval, the customer’s name moved to a hand-written list, along with an approximate delivery date. Husqvarna required a deposit of 500 Swedish Kronors ($64) with the remainder paid upon pickup of the motorcycle. The total price of 4,464 Kronors ($575) was about twice what the Silverpilen cost in 1955. Most riders picked their bikes up at the factory.

Despite the racing and sales success of the motocross project, support by Husqvarna management was not unanimous. Hallman recalls, “Even after the effort was 100% successful and Rolf and I each became World Champions in our respective classes in 1962, there was still hesitation and doubt within Husqvarna about a continued effort on motorcycles. With such a success in competition and sales, you would think that the doubters within management would have changed their minds, but not so. Rolf and I becoming World Champions again in 1963 still did not change the minds of doubters.”

What nobody knew at the time was that one unit from the 1963 production run was sold and shipped to Cardinal Motorcycle Sales in New York City. Apparently Cardinal Motorcycles had ordered samples of other Husqvarna products in the past, but nobody within the Husqvarna organization to this day has any memory or records of this transaction. A few years later, that ’63 motorcycle, practically unused, was traded to John Penton who put it in storage.

“Who needs a four-year-old motorcycle?” thought Penton at the time. Today, he says, “We put it in the back of the machine shop where we found it in 2005, almost 40 years later.”

The bike was cleaned up and then displayed at the American Motorcycle Association (AMA) Museum in Ohio. It is believed to be the only all-original survivor of the 1963 production run, including the original tires. 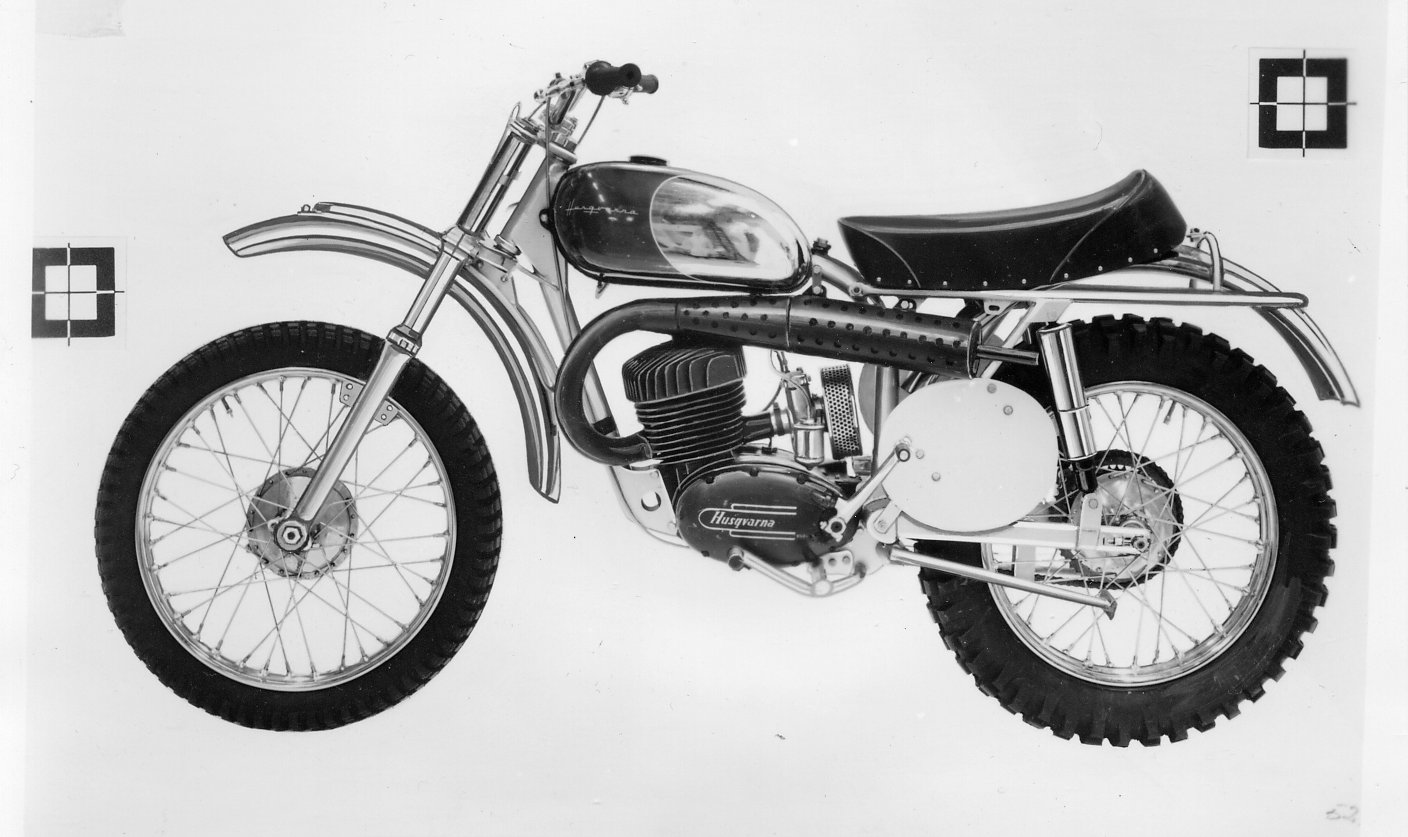