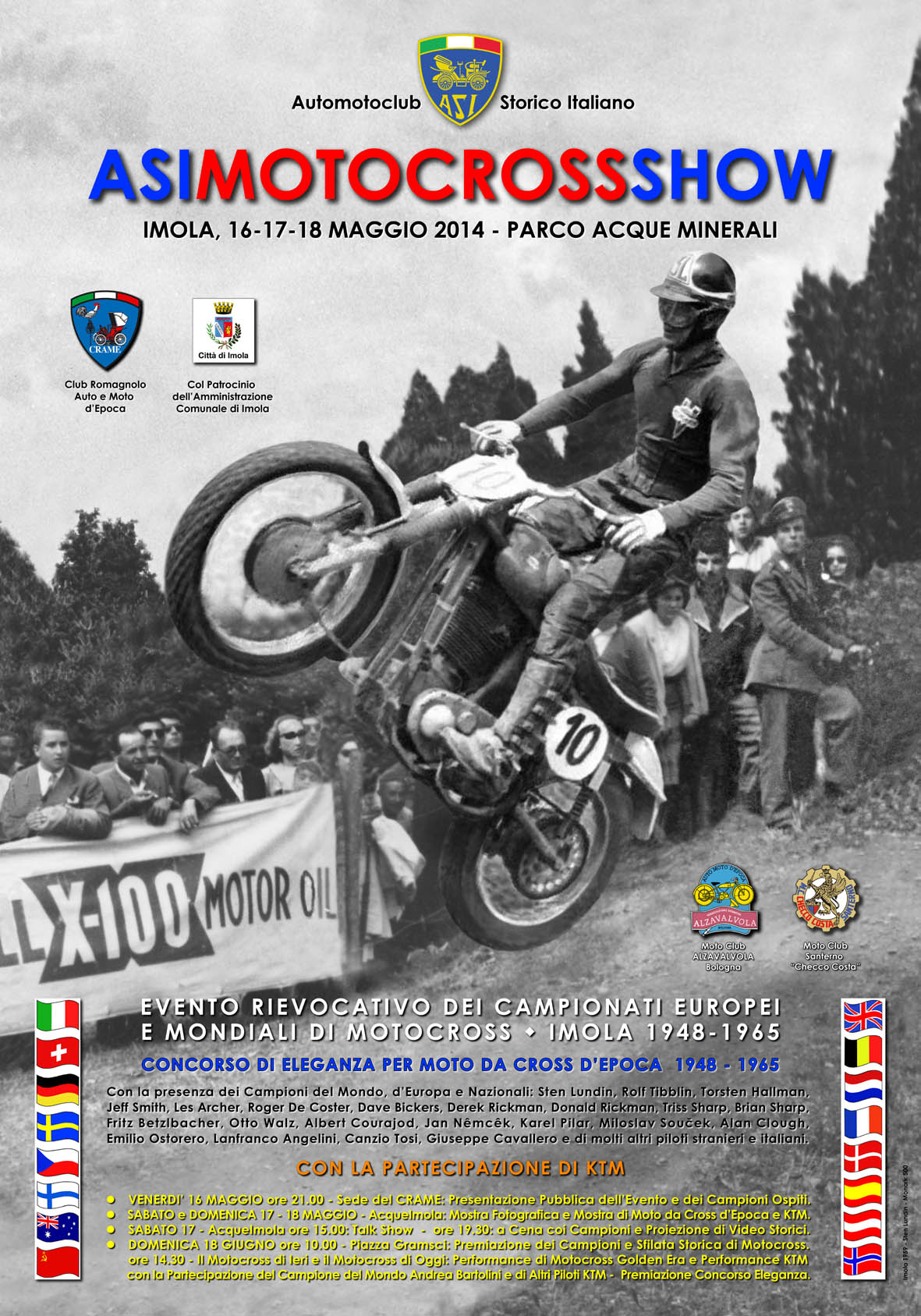 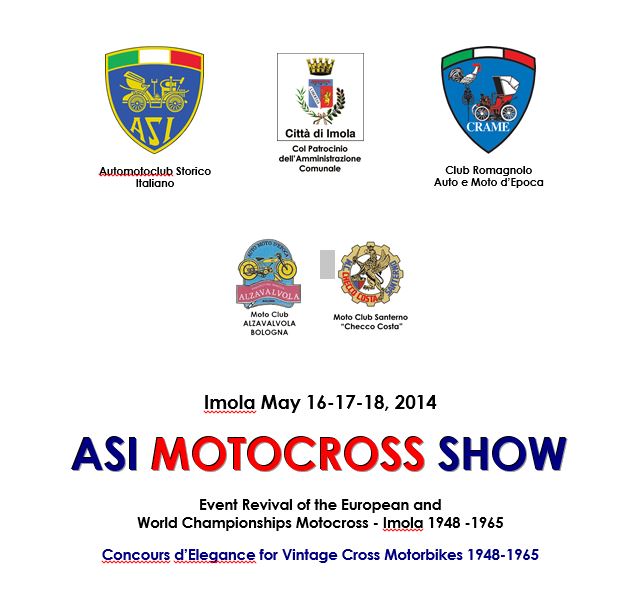 On days May 16-17-18, 2014 ASI SHOW MOTOCROSS back to Imola world champions and the motorcycles that have made the history of great motocross in the forties, fifties and sixties. The event, sponsored and supported by ASI, stands as a historic revival of the European and World Championships Motocross of Imola 1948-1965 .

The organization is under the responsibility of CRAME (Club Romagnolo Auto e Moto d'Epoca) Imola acting on behalf of ASI.

The event enjoys the patronage of the City of Imola.

They also participate in:

- The Moto Club SANTERNO "Checco Costa," historical association that organized the world championsips in Imola at the time.

KTM has given his support by participating with the latest motocross models.

Responsible organizer for ASI is the ex-rider of Golden Flames Gian Pio Ottone who took part in the Italian Grand Prix of Italy at Imola in 1960.

After 47 years since the last Grand Prix, will return to Italy the ranks of the champions of motocross Golden Era, which made ​​great the competitions of Imola and of Europe.

They have already joined almost all the champions who attended the edition of 2012 and other new important riders. They will be at Imola:

This glorious group of champions will be able to catalyze around him a multitude of other veterans of motocross and a large audience of fans.

The ASI MOTOCROSS SHOW, as well as exhibition and performance, provides, as highlight of the event, the awarding ceremony of the champions in the center of Imola and a historical parade that will go from the city to the Mineral Waters Park, site of the old motocross.

They joined the event more than thirty collectors of dirt bikes Golden Era pre-'65 from Italy and Europe, as well as several other Italians collectors KTM that will make possible the realization of a second historical exhibition KTM.

It will be available to the audience an exhibition of40motocross-bikes Golden Erapre-'65 provided byItalian and north-European collectors and an important photographic exhibitionwith a selection of350imagesrestored and with large formaton the history ofinternational competitions of Imola.

The exhibition KTM will include a wide range of motocross productions from early 1969 Penton until the last models.

On the morning of Friday, May 16th will be devoted to a historical walk in the Mineral Water Park together with the champions to look for traces of the old path of motocross. Will be rediscovered and remembered the most salient and spectacular passages.

On the evening of Friday, May 16th, at the Conference Room of the CRAME, there is the Public Presentation of the event and of the champions. In this moment will be offered to the guests of honor, the commemorative tiles of the meeting produced by Cooperativa Ceramica Imola.

On Saturday, May 17th starting from 10:00 am, the exhibitions will be open and it will be possible admire specimens of motocross-bikes unique, and technical and historical value from Italy and North-Europe. The exposure of the bikes will be divided into two sections: a pre-'65 Golden Era and a KTM. The audience can also visit the photo exhibition of great iconographic value on the history of the Grand Prix of Imola. During the day, fans can meet the champions.

In the early afternoon of Saturday, the Concours d'Elegance will award five bikes, for the best restoration, the best preservation, the age and the number of appearances in competitions (Italian motorcycles and foreign bikes) and a jury composed of the same champions guests will assign the awards to the winners collectors.

Later in the afternoon, it’s possible to participate in a talk-show, hosted by sports journalist Paolo Conti, together with the champions, journalists, industry experts, and other characters from the world of sports. In this context, participants can speak, ask questions, comments and listen to stories of great racing events of the glorious past.

At one stand there will be books on the history of motocross and motorsport.

In the evening, the tables will take the place of the bikes, and the audience can participate in a festive social dinner with the champions. At dessert time, will be projected on a wide screen video of the RAI historic Motocross of Imola.

On Sunday morning, May 18th the exhibitions at AcqueImola area will open again its doors. At the same time, in the historic center of the city, will host the Champions Award. The awards will be made by the Committee of Honour composed by the Mayor and the Presidents of the ASI, of the Moto Club and of the other Sports and Cultural Associations. Soon after, the champions themselves will create an extraordinary historic parade motocross Golden Era which, starting from the center, will reach the exhibition grounds in Mineral Waters Park, home of the glorious track.

During the afternoon, from 15.00, in an extensive lawn area adjacent to the exhibition of AcqueImola will be organized a performance dedicated to motocross bikes pre-'65 and KTM vintage and new. The old motocross will meet the modern motocross offering a highly exciting and spectacular show. Will be present KTM with the latest cross models that will be driven by champions of today and yesterday as Andrea Bartolini and other riders by surprises.

Official speakers and presenters of the event's will be lawyer Carlo Costa, President of the Moto Club Santerno "Checco Costa" and the sports journalist Paolo Conti.

Please find attached the poster and the event program.

THANKS KTM FOR PARTICIPATION