Swedes Start a Trend in the 500 Class

A rider needed both great stamina and strength to ride a 500cc in two 40-minute Grand Prix (GP) motos. The British four-strokes had remained fundamentally unchanged for almost a decade and weighed approximately 170 kg (370 lb). By late 1955, Swedish engineer Gunnar Hagstrom had built and delivered to Monark two examples of lightweight motocross specials using the dependable Swedish Albin engine, virtually unchanged since 1935. After testing and substantial frame improvements at Monark, these bikes were raced in the Swedish Championship with some success in 1956. For 1957, Monark contracted Sten Lundin and he rode one to third place in the World Championship behind Bill Nilsson and Belgian Rene Baeten. Nilsson had built his own AJS Special for the 1957 season and rode it to the first ever 500cc Motocross World Championship (the series had previously been called the European Championship). Nilsson used a 350cc AJS 7R engine, originally a road racing engine, enlarged and modified by him for motocross and placed in a lightweight frame of his own design.
For the 1958 season, Nymanbolagen, a Swedish manufacturer, stepped in and sponsored Nilsson and teammate, Gunnar Johansson. The machines were painted orange and entered under the name Crescent, which was actually the bicycle line of Nymanbolagen. This was perhaps the first commercial racing sponsorship in Sweden that promoted something other than a motorcycle product. At that time, advertising was not allowed on the machine or rider, except for the brand of the motorcycle. The rider could also display his name and country on his riding jersey. 1958 was not a good year for Crescent or Monark; the Grand Prix title again was awarded to Rene Baeten on the FN motorcycle.
That year, Husqvarna turned their focus to the 500cc World Championship series. Ruben Helmin remembers: “It was obvious that the 500 class had more status, it was for the World Championship. The 250 class at this time was only for the European Championship. And the best riders were in the big class, so within the motorcycle design team we were investigating the possibilities to build a real 500. Additionally, we saw how well the Monark team was doing. The problem we had was more on the economic side. There was no real budget allowing such a project. On the other hand, we had some development money within the design team that we could use, and we had a small competition budget.” Helmin and Jauren selected Rolf Tibblin as Husqvarna’s 500 hopeful. During the late summer of 1958, the Husqvarna team built a bike based on Tibblin’s old BSA frame, with an engine supplied by Nils Hedlund. The bike was ready to go in October. Tibblin raced it successfully several times, but remembers, “That bike never really had any harmony between the front and the rear. It felt too stiff; it was a monster.” Seeing that continuing with Tibblin’s bike would not be moving in the right direction, Husqvarna decided to design a completely new bike.
Helmin was responsible for the design of the new bike while Nils Hedlund built an engine based on the old M42 Albin Military powerplant, originally the engine designed by Husqvarna for the 112TV in the mid-1930s. To aid this effort, Husqvarna purchased and supplied certain parts, such as the aluminum cylinder and the valve train, including valves. Then Hedlund modified and assembled the parts into a race-ready engine. He assigned number 01-58 to his engine and delivered it to Husqvarna in early 1959. The rest of the bike was built and assembled entirely at Husqvarna by Morgan Hjalmarsson. The project produced a stunning bike with many novel features. There was, however, a problem with the fiberglass transmission cover. Fiberglass was a  relatively new material in the late fifties, supposedly offering strength and lightness. But by the end of development, it weighed considerably more than the original metal cover, and was christened the “Three-Ton Cover” by the team.

Picture of the "Three Ton Cover" 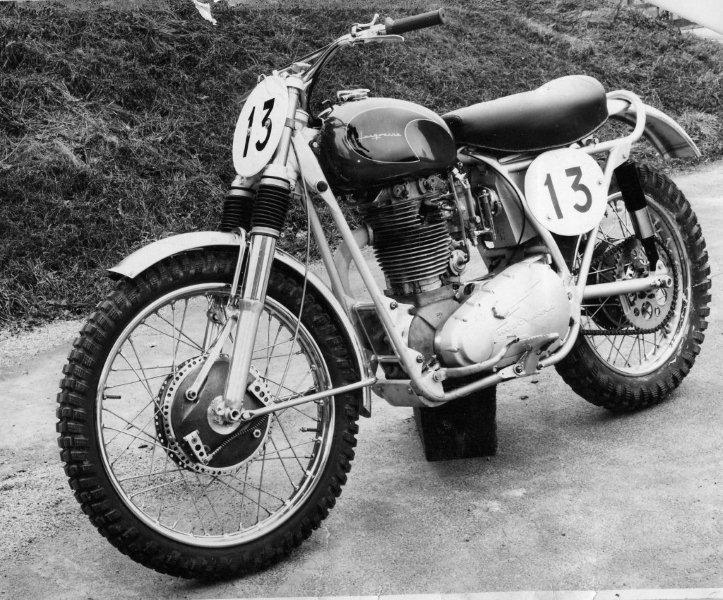