Who would have ever guessed that meeting Edison Dye would have changed my life so greatly? It was the mid-sixties; I was twenty-five, running the service shop at K & N motorcycles in Riverside California. I’d also done some racing in the desert, and was gaining recognition. One February day, Edison popped his head in the shop, asking, “Is there a Malcolm Smith here?” After I tentatively admitted I was the guy he was looking for, he brought in a brand new 250cc Husqvarna dirt bike, and told me he wanted to sponsor me to ride it. To sweeten the deal, he then dangled the offer of paying my way to the International Six Day Trials—the icing on the cake. That was more than forty-three years ago, and my relationship with Husqvarna continues uninterrupted to this day.

I was always fascinated by the International Six Day Trials (now called International Six Day Enduro), an event that motocross enthusiasts in the U.S. had only read about. Thanks to Edison, I attended my very first ISDT in 1966, and since that time have started—and more importantly, finished—the Six Days nine times, always on a 250cc bike. 54 days of riding without a failure! The Husqvarnas of that era were not always the fastest or the best looking, but when prepared right, they were dead reliable. Participating in The Six Days in 1973, when our Husky-mounted U.S.A. team won the Silver Vase, has to be one of my favorites. As for the bikes, my very favorite Husky has to be the 1984 400 WR for its excellent power delivery and suspension. It worked perfectly for me!

Over the years, I have enjoyed my association with my “second home” in Sweden tremendously— the Swedish countryside, the friendly and helpful people, and everyone at the Husqvarna factory. At times, I almost felt that I had been adopted. Often, when I visited the factory on business and stayed in one of the guesthouses, I would get up at four in the morning and go for a long walk through the city and into the countryside. It was already daylight, completely quiet except for the birds, empty of traffic or people. It was a fantastic experience.

I’ll never forget the helpful and supportive people of Husqvarna. One year, when the Six Days was held in Sweden, I ran the race without a support crew of any kind. But there was a very kind lady who would watch for me. Halfway through each day I’d stop, exhausted and tired, and she’d offer me a cup of hot Swedish Blueberry Soup (the traditional soup used by long distance skiers to recover strength and energy). It worked—and thanks to her kindness, I was able to continue on, stronger and faster after drinking this elixir.

Clearly, any recollection of Husky would be incomplete without giving a heartfelt thanks to Bruce Brown for his movie, On Any Sunday. It was this movie that introduced American families to the wonderful world of off-road motorcycling. During the many months of filming, I became great friends with Mert Lawwill and Steve McQueen, both of whom I had only known from afar. Of course, Mert’s two AMA championships spoke for themselves. And after riding daily with Steve during the filming, I discovered a rider who probably could have competed at a professional level, had he chosen that line of work.

It has always been a pleasure to work with the Husqvarna and its people, both in the U.S.A. and in Sweden. They were always willing to listen if things were not right, and to do what it took to make things right. We worked hard together to keep our customers happy! A book on Husky’s contribution to off-road motorcycling has been long overdue, and I’d like to heartily thank and congratulate Gunnar Lindstrom, whom I’ve known since 1968, and the many contributorsfor their efforts in making this wonderful book a reality.

Husqvarna has always been the brand that has been close to my heart. As a young boy, I was impressed by their motorcycles, their history and background as I read about the v-twins of the 1930s and their other competition bikes. I started my racing career on a Husqvarna Silverpilen, and I rode Husqvarna when I won my four individual World Championships and five Team World championships. As a Swede, I was particularly proud to win on a Swedish motorcycle!

When I look back to those first years, back in the sixties, it’s surprising that the enthusiasm of a small group of motocross supporters within the company convinced factory management to manufacture one hundred motocross 250s, reversing their original plan to stop all motorcycle production. The design of this 1963 machine was based on my World Championship winning machine from the previous year; it was an immediate success, with all machines pre-sold before production started. And even then, there were potential customers lined up outside the factory hoping to buy a motorcycle. Finally, the motorcycles got their own budget and didn’t have to beg for money anymore. But even after Rolf Tibblin and I each became World Champions in our respective classes in 1962 and 1963, there was still hesitation and doubt within the Husqvarna management about a continued effort on motorcycles.

During these wonderful years, I had the privilege to work with technicians and staff who were there from the beginning; they started the special motorcycle project from scratch, machines manufactured exclusively for motocross and enduro. We at Husqvarna were all pioneers within the sport of motocross. We all played a part in the advent of series production of  motorcycles made exclusively for motocross, something that had never been done before at this scale.

Indeed, there were several manufacturers in England in the late 1950s who made small series of motocross bikes, but because of the declining sales of street bikes, production stopped, and these brands disappeared. At Husqvarna, the doubters among management still remained, but they did respond to an inquiry from Edison Dye, an American looking to buy motocross machines. I cannot overstress the incredible importance of Edison Dye’s influence, both on Husqvarna and the development of motocross in the U.S.A. The single biggest cause of Husqvarna sales was the introduction of motocross in the U.S.A. Without Edison’s enormous willpower, creativity and vision, motocross would not be in the position it is today. He was controversial, but he saw possibilities in almost everything and would often do the unexpected. He had many friends, but created some enemies while promoting his many projects, but he did teach me the hard knocks of the business world.

One of my duties in the business Edison and I started together was often to put the brakes on some of his lofty ideas. I wanted motocross to be run the way it was in Europe, while he wanted to make everything bigger. For example, when we laid out the course in Westlake Village, California, Edison wanted the track to be twice the final length, more like an Enduro course. But he did listen to my point of view that spectators should see the riders as much as possible, there should be a fence around the course, the announcer must be able to see the action around the course, etc. So even if he was a person that often forged ahead and could be considered stubborn, he also listened and learned. During the first couple of years, we traveled a lot together, both in the U.S.A. and in Europe, and I have plenty of wonderful memories. I often reflect back on those days with a smile on my face; Edison was an extraordinary person. Motocross in America would not be as popular as it is today without Edison Dye.

When the winds turned positive at Husqvarna later in the sixties, I was thoroughly convinced that after my career as a competition rider was over, I would work at Husqvarna, buy a villa on Lake Vattern and live the rest of my life as a citizen of Huskvarna. This was a dream I had ever since I first visited the Husqvarna factory. The city is located on the incredibly pretty shore of Lake Vattern, a tremendous difference from the flat lands and wide open Uppland plains where I grew up. But sadly, my dream was never realized.

Husqvarna motorcycles will always be remembered as the brand that started the motocross revolution and put the sport of motocross on the map all over the world. With this book I hope that motocross enthusiasts all over the world will gain some insight into how this process developed and how the people behind it managed to complete and achieve their dreams.

I am very happy to see that Gunnar Lindstrom has documented facts, happenings, pictures and all the history that surrounds Husqvarna Motorcycles in a great way in this book. For those individuals interested in motorcycles, including myself, we now have a reference point to check the facts and events surrounding Husqvarna through the years. Both for me personally and for many of my former racing friends who are often asked questions about Husqvarna, I’m grateful to finally have this valuable history, available and with all the correct facts, to refer them to. 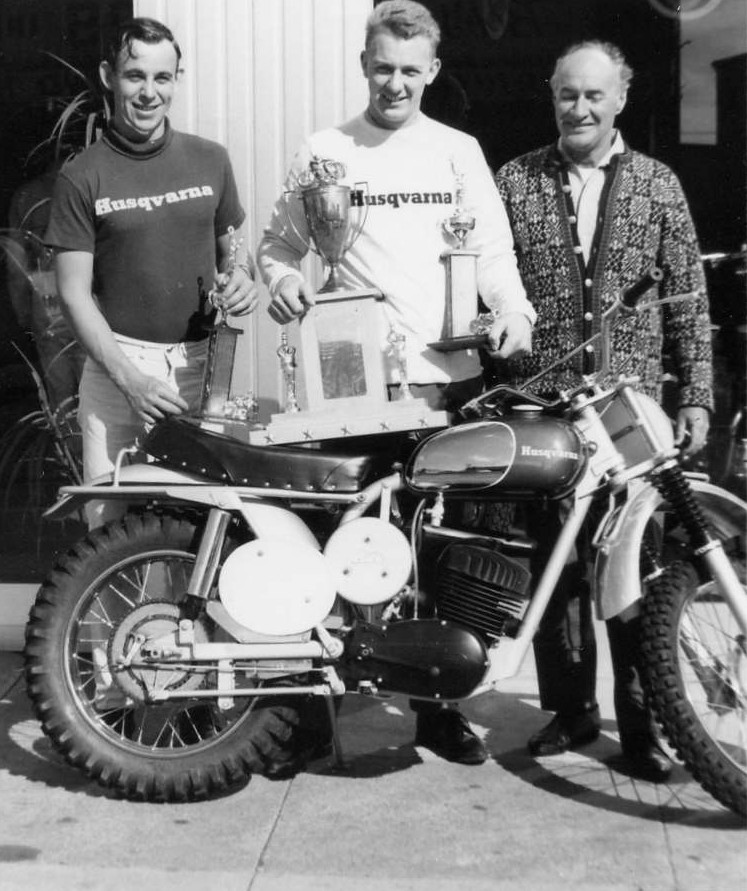